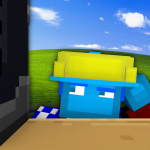 By YoshiHunter,
July 12 in Wallpapers and art