Jump to content
Get pre-release 2 of Mine-imator 2.0 with the latest bugfixes! × 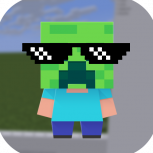